A religious building from the 16th century is the architectural model for the new Istanbul airport. He could soon become the largest in the world. But does he also stand for cosmopolitanism?
Sultan Süleyman, called the Magnificent, gave the order to build a mosque on the third hill of Istanbul. He commissioned Sinan, his best builder. The terrain was difficult, but Sinan created a masterpiece, one of Istanbul's landmarks.

Information About Istanbul New Airport Design and History
More than 450 years later, the architect Nicholas Grimshaw was inspired by the Süleymaniye when he designed the new airport of the Bosphorus metropolis: the light from above that fills the whole room, the colors and shapes inspired the British and his Norwegian partners from the Nordic Office of Architecture. A religious building from the 16th century as a template for a modern temple of transport?
In the spacious airport hall the view strives upwards, a lot of light ensures a friendly reception. Dome roofs and pillars take on Ottoman models and reinterpret them. Quite different from some recent buildings in the center of Istanbul, where the attempt to lean on historical role models, failed completely.

Dominating in the new airport, which bears only the name "Istanbul", are white and shades of gray. That calms down. Nervous, however, is who does not bring enough time for the long ways here. From check-in to the furthest gate, there are two kilometers, with conveyor belts helping. What you lose in time by running, should be saved in the passport and luggage controls, promises the boss of the airport company.
There are seven entrance gates, 500 check-in stations, over 200 passport control counters. Long queues, as they were used to travelers from the last always crowded Atatürk Airport, should no longer exist. You can then spend your time in the extensive Duty Free shops, for which 55,000 square meters are reserved. Airports are also cathedrals of commerce. 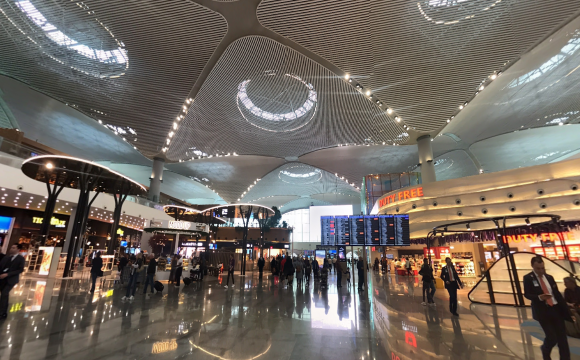